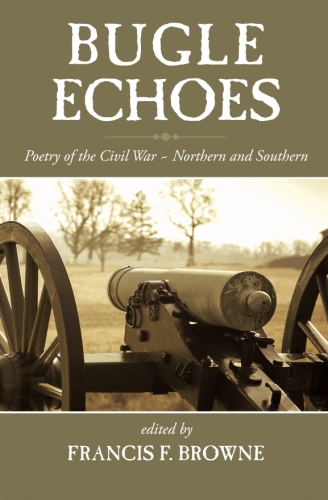 Bugle Echoes offers a vast collection of poetry illustrating the lived experiences of the Civil War. The collection was edited by Francis Fisher Browne (1843-1913) who fought in the Civil War as a soldier in the Forty-Sixth Massachusetts Volunteers. His father, William Goldsmith Browne, was a

poet and printer in Massachusetts. After the war, it was unsurprising when Browne pursued a literary career as editor of several Chicago-based journals, including a revival of The Dial, a celebrated transcendental periodical.

Browne personally knew Walt Whitman, John Greenleaf Whittier, James Russell Lowell and other eminent literary figures, many of whom shared with him the trials of the Civil War and are featured in this volume. When he died, John Muir said, “Francis Fisher Browne, or Browne the Beloved as I like to call him, was one of the finest and rarest men I ever knew.”