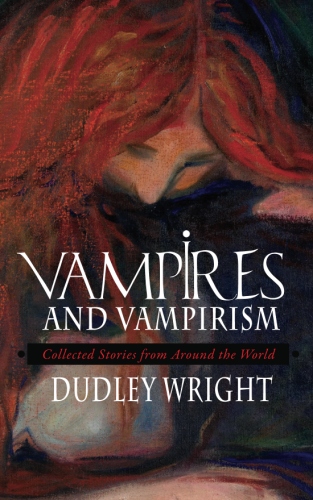 Dudley Wright’s fascinating work offers an academic treatment of the history of vampires. He traces the legend of vampires through history and around the world, making stops at Hungary, Britain, Russia, and various parts of what was then referred to as the Orient. He offers a collection of stories from these regions as well, so readers can draw their own conclusions.

Dudley Wright (1868-1950) is also an interesting character of note. He was born in England, and traveled throughout the world studying religions and other belief systems. He was a professional journalist and wrote for a variety of publications. He became the Assistant Editor of the Freemason and Masonic Editor of the Times of London, and other Masonic works. He spent a lot of his research on looking for a common thread to all religions, and wrote for numerous religious journals, such as Spiritual Power, the Homiletic Review, and the Bible Review. He flirted with various religious, including Buddhism and Catholicism, but he converted to Islam and ultimately returned to the Ahmadiyya movement.