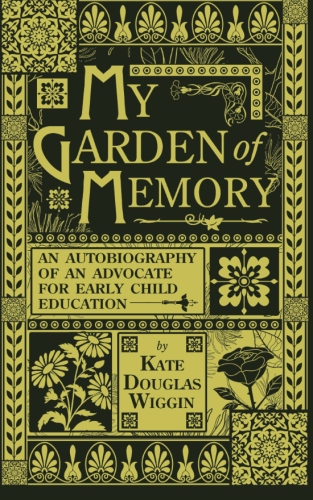 Kate Douglas Wiggin (1856-1923) was a pioneer, leading the way to massive reform of children’s education in the United States, along with her sister, Nora Archibald Smith. During the late 1800s, most people had minimal education, as children went to work at very young ages. To help combat this issue, Wiggin began the Silver Street Free Kindergarten in San Francisco. Wiggin herself had had a variety of educational experiences, including home schooling, short terms at Gorham Female Seminary, Morison Academy and Abbot Academy where she graduated in 1873.

Wiggin started the Silver Street Free Kindergarten, and then developed a school for educational training in conjunction with it. To help raise money for the schools, she wrote several popular
books, The Story of Patsy, The Birds’ Christmas Carol and Rebecca of Sunnybrook, among others. She also wrote books on teaching, such as Kindergarten Principles and Practice. My Garden of Memory was published posthumously and offers a detailed look at her interesting and meaningful life.

This edition is dedicated to Dr. Karan Powell, Provost of the American Public University System and in her own way a pioneer in extending the boundaries of learning.