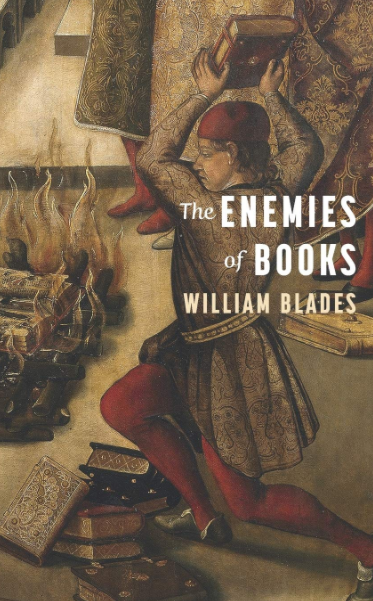 William Blades was an bibliophile and book collector of the 1800s. Born in 1824, he was a printer and a bibliographer. His father owned a printing business that Blades was apprenticed into, and it became known as Blades, East & Blades. He was especially passionate about collecting and preserving works by William Caxton, resulting in the publication of Life and Typography of William Caxton, England’s First Printer (1861-3).

Blades wrote this humorous account of various forces that can intentionally or accidentally destroy book collections, ranging from pests and fire to women and children. Blades’ accounts give readers an insight on the lifestyle and technology of a previous era, highlighting gas lamps and asbestos stoves for example. While his advice is antiquated, Blades offers an interesting and irreverent account of a serious need. Books, after all, are fragile and in need of the utmost care regardless of the century.

This edition is dedicated to Lindsey Larson of American Public University, busy helpmate to scholars and researchers, never idle and always curious.

N. Hudson Moore (1857-1927) was the penname of Hannah Woodbridge Hudson, who, in person went by the nickname Nannie. In London, her books were published under the name Mrs. Hannah Woodbridge Hudson Moore. She was a passionate antiquarian and knowledgeable about furniture and design, and wrote numerous volumes about her enthusiasms, including The Lace Book (1905), The Old Furniture Book (1903), The Collector’s Manual (1906), and Delftware, Dutch and English (1908). She also wrote children’s stories and stories about flowers, including Flower Fables and Fancies (1904). She died in Boston on October 1, 1927. 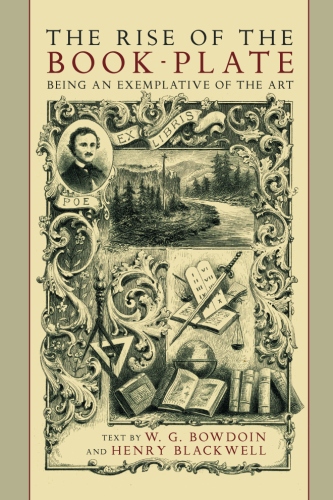 Bookplates were made to denote ownership and hopefully steer the volume back to the rightful shelf if borrowed. They often contained highly stylized writing, drawings, coat of arms, badges or other images of interest to the owner. Theearliest known form of a bookplate originates from roughly 1390 BCE, in Egypt. They became popular throughout Europe during the Middle Ages, and since have appeared throughout the world, being especially popular in larger personal libraries and book lending societies.

William Goodrich Bowdoin (1860–1947) wrote passionately and a great deal on the art of books, including book plates. His works include American Bookbinders, published in 1902. He published frequently under his initials, W. G. Bowdoin. In this particular work, Bowdoin has collected a fascinating variety of bookplates from around the world to showcase different styles.

This edition is dedicated to Larissa Watkins, librarian and bibliographer extraordinary, friend to countless authors.

by A. Edward Newton

with a new introduction by Katherine Mead-Brewer

The Amenities of Book Collecting is a unique compilation of literary history, autobiography, travel writing, and, of course, the history of book collecting. Through these essays and reflections, Newton presents his own travels, collecting goals and expeditions, relationships, and interests as an introduction, for the layman and budding collector alike, to the surprisingly wide world and art of serious book collecting. 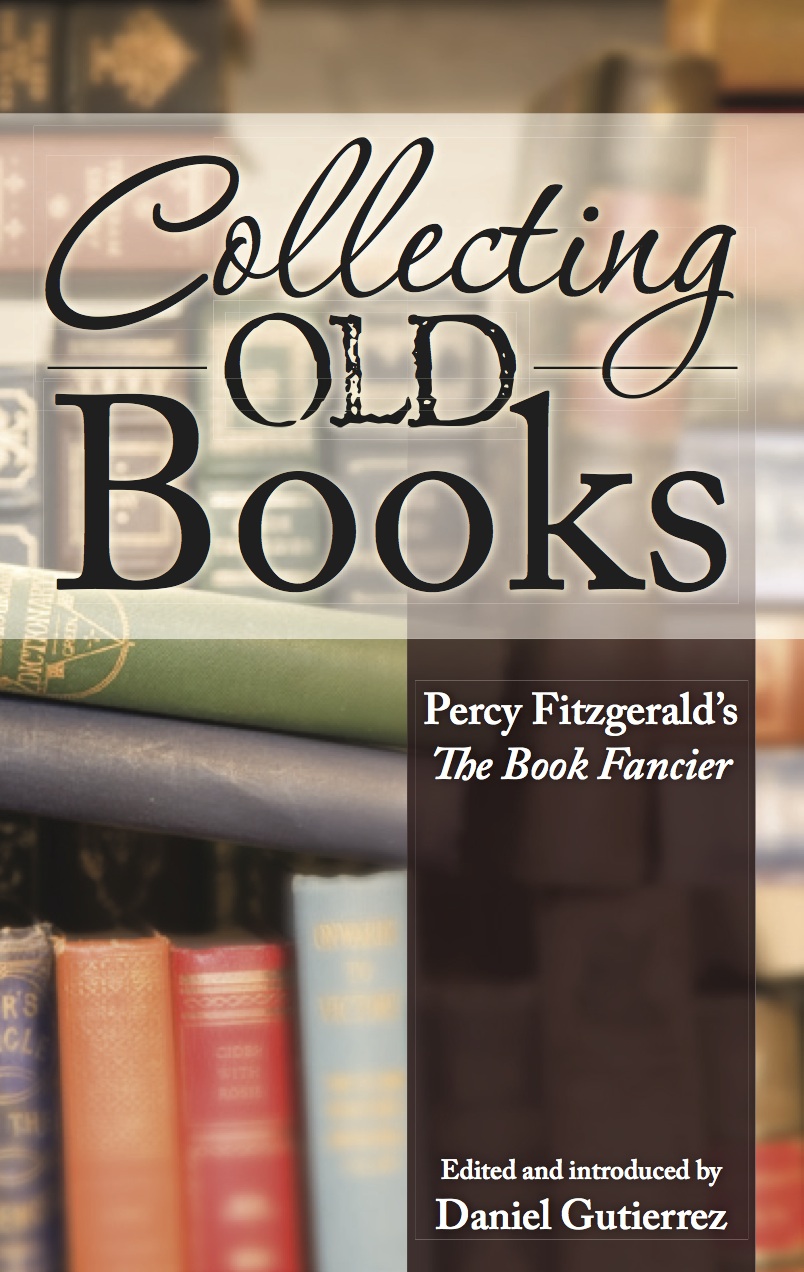 It takes one to know one’ is true of avid readers, and certainly of bibliophiles who are acquainted with Percy Fitzgerald, a man who enjoyed writing about old books as much as he did reading them. His observations and prejudices about his favorites will inevitably start a conversation with those who agree or disagree with him, as he reaches out from the page to grab the hand of fellow browsers to sit and talk for a while.

Edward Gordon Craig was an artist philosopher whose daring stage sets were many years ahead of their time and whose theories about the use of masks in theater remain startling even today.  His work with bookplates is too little remembered, but the designs are a wonderful introduction to his aesthetic theories and his experiments with light and shadow, as this unique volume illustrates.

Original Nothing, or the Bookplate cover

The collecting of autographs of American presidents is done with a passion that is not found about similar figures in other countries.  Canadian prime ministers or Finnish presidents are not the focus of hobbyists. The enthusiasm of getting a set of presidential signatures is something of a comment on the energetic American historical emphasis on the country’s chief executives. Even in George Washington’s time there were forgers who allegedly would produce a Washington letter for a drink at a tavern, so the authenticity of Presidents is a subject marked by intrigue and misadventure. Paul C. Richards’ scarce volume is a useful guide to a subject marked by increasingly high prices in the auction rooms. He was a great benefactor of Boston University, where his Robert Frost and Theodore Roosevelt collections are a permanent testimony to his relentless searching of attics and garrets and shrewd purchases.

Edited and Introduced by Daniel Gutierrez-Sandoval

Hendrik Willem van Loon was a Dutch-American professor, journalist, prolific writer, and illustrator. His most famous work, “The Story of Mankind” earned him the prestigious John Newbery Medal, extended by the American Library Association for distinguished contributions to American literature for children.

“How to Look at Pictures: a Short History of Painting” was originally published in 1938 as part of the wider efforts of the National Committee for Art Appreciation, formed at the encouragement of Eleanor Roosevelt and other nationally prominent people, to support the arts and boost the public’s spirit after the depression years. The book remains a classic attempt to promote and integrate the arts as part of the everyday life in American society.

Original How To Look At Pictures cover 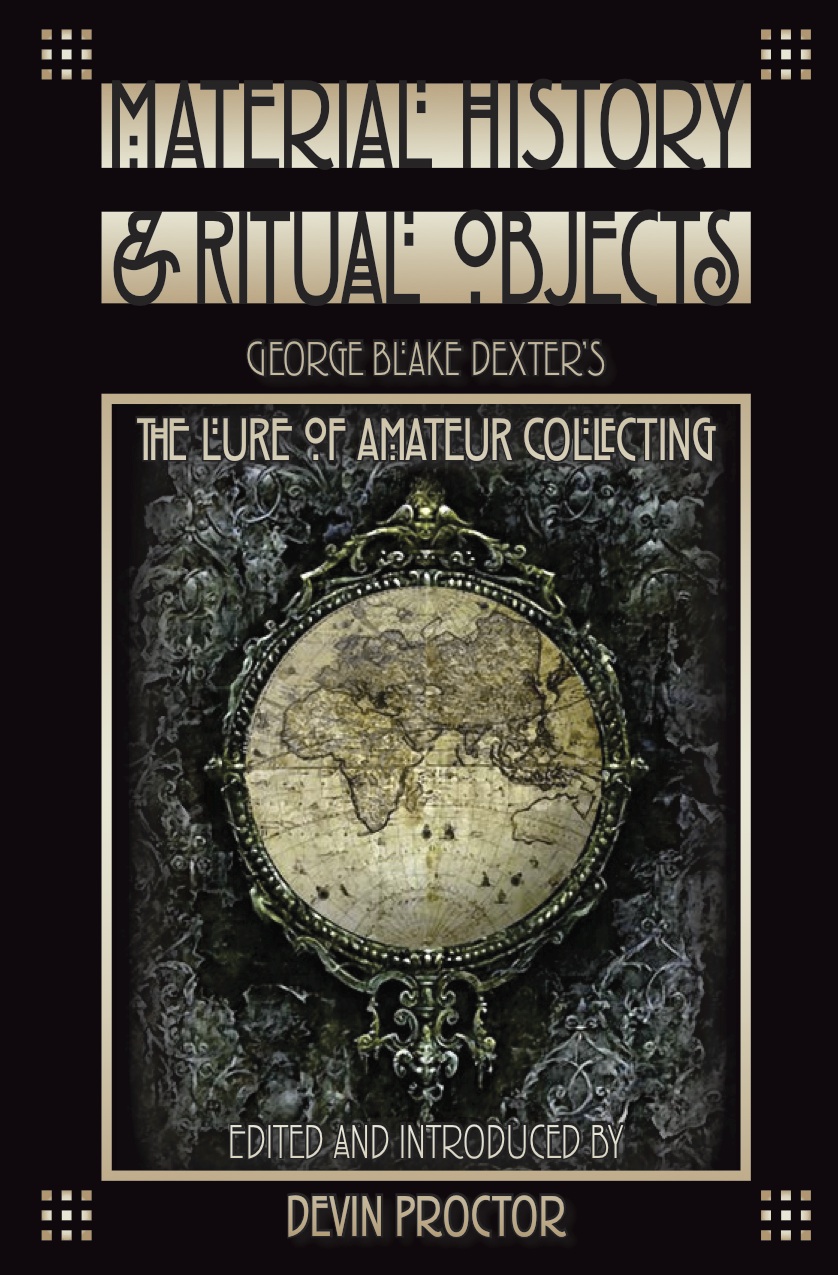 Edited and Introduced by Devin Proctor

From the original 1923 front cover: “The habit of collecting is one that yields the greatest delight to its possessor, since the collector goes through the world always on the watch for the beautiful and rare. Mr. Dexter mounted the hobby as a child, and through many years of travel through many countries he has gratified it as occasion presented itself, until now he has a beautiful and unique collection, including articles of furniture, porcelain, jewels, plate and souvenirs from celebrities. Each one was acquired as the result of some interesting encounter or experience, and this book tells the stories of these various art objects.”

As the original cover promises, this book follows the ‘gratifications’ of George Blake Dexter, wealthy hobbyist and world traveller. Equally problematic and charming, Dexter’s adventures of acquisition take readers into a world of passionate collecting available to a privileged few. Whether seen as acts of addiction, empire, or merely of entertaining distraction, Dexter’s experiences are the crystallization of a cultural moment in a time too often forgotten