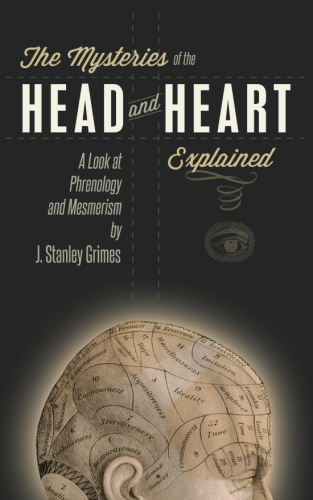 James Stanley Grimes was born in Boston on May 10, 1807. Although he wrote a tremendous amount, little is known about him personally. He married Frances Warner in 1832, but never remarried after she passed away in 1848. He graduated from Union College in 1840, went on to teach law the following year at Castleton Medical College. He quickly left law, focusing on writing on everything from natural selection, theology, and neurology but his focus became mesmerism and phrenology. He wrote extensively on issues of science, religion and human advancement as well.

The Mysteries of the Head and Heart is broken into three sections, with the first discussing phrenology, the second examining physiology and the third broadly looking at mesmerism. Some of his suggestions retain a certain possible validity, despite the controversial subject matter. One commentator notes, “In 1839 … Grimes — then living in Buffalo, New York and running a small group of phrenologists called the Western Phrenological Society — published a modification of Coombe’s phrenological system that [a] divided the organs of the brain into three groups (the ipseal, the social and the intellectual), and [b] added several new organs to the commonly-held phrenological model, including organs of chemicality, pneumativeness (merely having to do with breathing, alas), sanitativeness and (important for this discussion) credenciveness.”