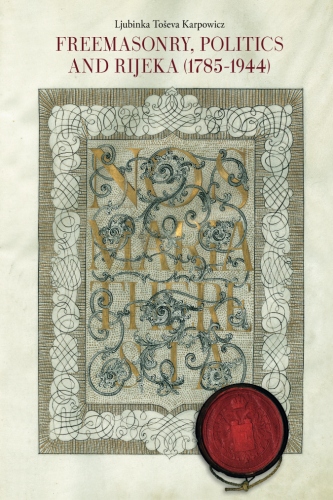 During her research in the archives of larger cities in various countries (Rijeka, Belgrade, Rome, Budapest and Washington, D.C.), she noted the activities of Masons within various political entities. This gave her the impetus to devote additional research to the empirical and historical analysis of Masonry as a special political group.

The result of her work was the publication in 2007 of her book D’Annunzio u Rijeci—Mitovi, politika i uloga masonerije (D’Annunzio in Rijeka—Myths, Politics and the Role of Masonry) which covers the period 12.IX. 1919 to 12. XI.1920. The book raised great interest and Lj.T. Karpowicz then focused her research over a longer time frame on the same theme.

In addition to the foregoing books, the author also published two additional books: Pravoslavna opština u Rijeci 1720-1868 (The Orthodox Commune in Rijeka 1720 -1868) (published in 2002), and Tajne Opatije—Tajna diplomacija i obavještajne službe u Opatiji 1890-1945 (Secrets of Opatija—Secret Diplomacy and Intelligence Agencies in Opatija 1890-1945). Lj.T. Karpowicz received the Award of the City of Rijeka in 2016, the committee making the award noting that her research had encouraged further investigation into the history of the city of Rijeka and assisted in promoting the reputation of Rijeka in the world.

The book Masonerija, politika i Rijeka (1785-1944) (Freemasonry, Politics and Rijeka (1785-1944) is the result of empirical and historical analysis of the work of Masonry from various states in Rijeka’s corpus separatum, a special political body in Central Europe. It analyzes the work of Austrian, Hungarian, French and Italian Masonry through numerous decades. It focuses on the work of the Hungarian wing of the Rite of Strict Observance, whose members served as Governors of Rijeka; the work of former exiled Hungarian politicians, who were Masons, after their return from Western Europe and their role in the establishment of Austria-Hungary (the Dual Monarchy); and discusses the specifics of Masonic organization in Hungary and its contributions to the development of Hungary’s special type of liberalism.

The greater part of the work concentrates on the efforts of Italian Irredentism in Rijeka in which intellectuals and Masons from Rijeka and Italy played a leading role. Some chapters analyze the work of Italian Masonry during the Fascist era, the military coup against the Free State of Fiume and the attempts to resurrect the Free State after the fall of Fascism. The appendices and supplements contain biographies of Rijeka’s Masons, as well as a report of the American Consul concerning an attack on the Palace of the President of the Free State of Fiume, the proclamation of the Rijeka’s Fascists concerning the attack on the provisional government, and a letter from the Rijeka’s Lodge Sirius to Belgrade’s Pobratim Lodge.