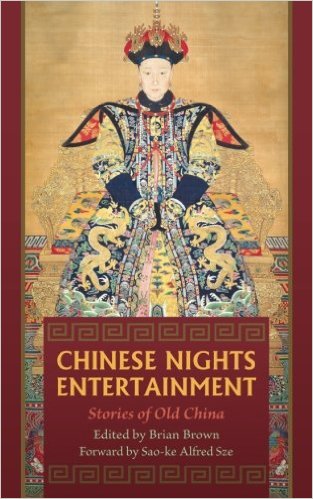 “In a small country town in China there lived a great scholar named Kno Tzu Chien. This sage was an authority upon the old classics, and he also loved the folklore and fairy tales of ancient China. On winter evenings the home of this greatly loved scholar was a popular gathering place, and many of the old folks, from near and far, came and told folk tales that had been told to them in their youth— tales of old China that had been handed down from generation to generation in the same way —told at the firesides. Kno Tzu Chien presided over all these gatherings, (which might be called “Chinese Nights Entertainments”), and during the evenings would consult several old books, so as to give an accurate and detailed account of the interesting history and legendary lore which belongs to old China.” Such begins the work, Chinese Nights Entertainments. It was originally researched and published in the early 1920s amid new interest in China by Americans, and as part of the favorable response of translated Chinese poems by Amy Lowell. This work borrowed from a great many English translations of Chinese stories from the mid-1800s that were floating around London and were condensed in this book, which was prefaced by Sao-Ke Alfred Sze, Minister of China to United States, giving it authority and gravitas.