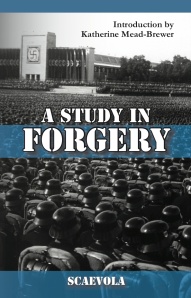 with a new introduction by Katherine Mead-Brewer

A Study in Forgery is a truly unique read centered on Polish and Soviet Russian relations in the first half of the 20th century. Written under the pseudonym of Scaevola in the height of World War II, this book provides a fascinating and passionate call for Poland’s freedom from Russia and for the world’s recognition of the fact that Poland’s supposed desire for Soviet rule was an attempted forgery wrought by Russia through violent cultural domination.

The identity of pseudonymous author Scaevola remains unknown. The pseudonym Scaevola, however, has a storied past. The name was used in the years leading up to the American Revolution on broadsides railing against the East India Tea Company. Gaius Mucius Scaevola (the original) was a would-be Roman assassin from the 500s BC, famous for his bravery and patriotism. The term is Latin for “left handed” and is also a genus of flowering plants. Since its use in this book, the term has additionally served as the name of a nuclear test blast over the Pacific Ocean in 1958.