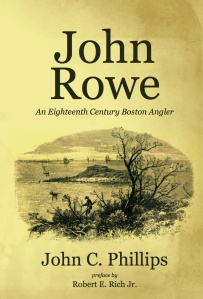 with a new preface by Robert E, Rich Jr.

John Rowe’s observations on fishing near Boston in the eighteenth century appeared in a rare limited edition of only 150 copies more than eighty years ago. Besides his Boston area fishing, Rowe went on excursions to the Monument River, which is now the Cape Cod Canal. He appears in American history briefly as an owner one of the ships involved in the Boston Tea Party, but his notes on angling before the Revolution are perhaps a more enduring claim to fame.