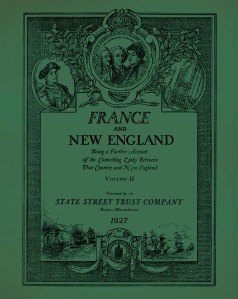 The French may have lost their war for America in the eighteenth century but they have never disappeared from New England. About five percent of the population of Maine speak French, with another three percent speaking it in New Hampshire and two and a half percent in Vermont. In fact, in some towns the majority use French as a first language: for example, sixty-give percent in Berlin, New Hampshire, and eighty-four percent in Madawaska, Maine.

French spoken in New England over the centuries is a dialect related to Canadian French, but the culture is distinctive and concern over its existence was one reason for the documentary film Réveil This cinema study by Ben Levine examines the persecution of French Americans by the Ku Klux Klan, and the struggles to preserve a proud heritage in a monoculture America, and should be seen along with reading the books in this trilogy.

One asset in that long struggle has been the American respect for the memory of the Marquis de Lafayette. His friendship with Washington and his exploits in the American Revolution are a permanent foundation for Franco-American ties. After his service in the American Revolution, Lafayette fell on hard days as the French Revolution involved him trying to prevent excesses and for his pains he was imprisoned for five years.  Bonaparte obtained his freedom and he served until his death in the French Chamber of Deputies.

As Lafayette neared the end of a notable life, in 1824, President James Monroe invited him to be the guest of the American nation in a gesture of thanks for his role in American independence. He accepted and visited New England in 1824, including New Haven and Providence, as well as Lexington, Concord, Salem, Marblehead, and Newburyport. In late August that year he was received in Boston with enormous excitement.  He then toured all existing twenty-four states. On returning to Boston in June 1825 towards the end of his American travels, he laid the cornerstone of the Bunker Hill Monument on June 17. After a final dinner with President John Quincy Adams in Washington, he sailed for to France on September 7. He died in 1834 and is buried in Paris under soil from the Bunker Hill battlefield.

The series of which this title is part is a reminder of the friendship between the two countries that he so embodied, commemorated as well by the American Friends of Lafayette, the Massachusetts Lafayette Society, the Society for French Historical Studies, and the French Heritage Society. It is very much a living tradition.