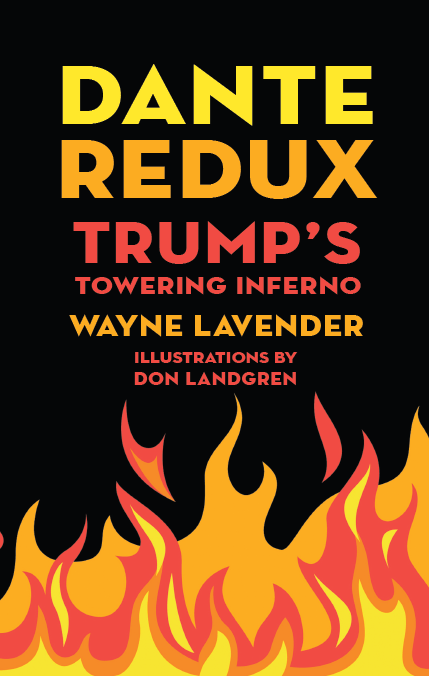 “Some books educate, others illuminate, and still, others bring forth waves of emotion. Here, Wayne Lavender checks all these boxes and so much more. Using Dante Alighieri’s 700-year-old map as a rough guide, this treatise reveals in painful yet humorous detail the state of the world’s greatest experiment in democratic governance and the tragic end of the American Century. Calling this a ‘must read’ would be an understatement.”
— Jonathan Pelto, (He/Him/His)
State Legislator and politician now college professor
Department of Philosophy and Political Science, Quinnipiac University

“Wayne’s work brilliantly summarizes the anger many Americans experienced during the Trump years while acting as a retelling of the administration’s heinous politics, policies, and corruption. The book cements the Trump’s administration and enablers as a clear and present danger to democracy in the United States. This is all done while utilizing an ingenious method of storytelling by overlaying those aforementioned tales of the Trump era over Dante’s famous work. This is a GREAT read!”
— Paul Cappuzzo (He/Him/His)
Political Science Major & Economics Major History Minor
Quinnipiac Democrats President Quinnipiac University 2023

Most of us have always assumed that Donald Trump and his cronies are going to Hell. But to which corners, and what torments? 700 years after Dante published his epic poem Inferno, Wayne Lavender has resurrected this storyline and placed Donald Trump and his enablers in their own Hell. The book describes the evil, lying, racist and traitorous words and actions of Donald Trump during his four-year reign of error and terror. A work of fiction, this book uses real quotes, facts, and dark humor to make the case that the Traitor-in-Chief was unfaithful to the US Constitution and the American people. It lies at the nexus of political science and theology and is an important contribution for anyone interested in truth, justice, and democracy in the United States.