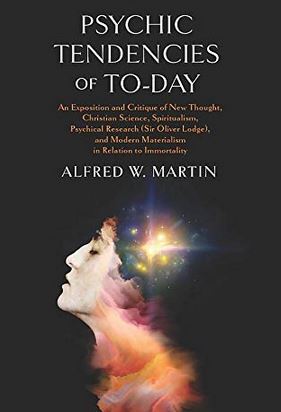 Author Alfred Wilhelm Martin (1862-1932) was a Unitarian minister, and led the Ethical Culture Society, which was centered on the concepts of morality being independent of theology, and that industrialization and modernization presented new problems that religion was not fully equipped to handle, among other tenants. Martin wrote several books on comparative theology, including The Dawn of Christianity, Faith in a Future Life, A Philosophy of Life and Its Spiritual Values, and Seven Great Bibles.

Sir Oliver Joseph Lodge enjoyed a long life filled with many unique accomplishments. Born on June 12, 1851 he worked tirelessly until his passing on August 22, 1940. He is primarily known for his work as a renowned physicist, particularly for his work on electromagnetic radiation, radio and electricity. However, he was also deeply interested in spirituality and telepathy. Lodge over blended his two interests. Arguably, this was influenced by the death of his son, Raymond Lodge during World War I. He wrote a best selling book about his son’s death and his attempts to contact him in the afterlife, entitled Raymond or Life and Death. His belief in Spiritualism strongly influenced his research, causing some debate within academic communities over his scientific findings. Lodge wrote and researched so many subjects that his papers are scattered across numerous institutions. Those seeking further information on his psychical research can find his papers at The Society for Psychical Research in the United Kingdom.