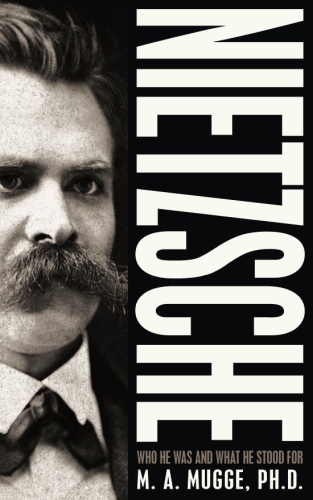 by M. A. Mugge PhD, Edited by E. Haldeman-Julius

Friedrich Nietzsche (1844-1900) has had a profound impact on our way of life. Among other things, he was a philosopher, a poet, and a scholar. Unfortunately, he suffered from poor health, which caused him to resign from his position as the Chair of Classical Philology at Basel, which he held at the age of 24. At 44, he was so ill that his mother, and then his sister, had to care for him until his death at the age of 55.

Nietzsche is commonly associated with nihilism, critiques of Christian morality, and his strong opposition to anti-Semitism, and nationalism.
There was a brief time when his sister reworked his manuscripts to favor Nazi ideology, but the correct manuscripts were uncovered.

Many scholars have written about Nietzsche. M. A. Mugge wrote a great deal about philosophy, especially Greek thinkers. This work offers a biography of Nietzsche, and includes Mugge’s views on his writings and life.