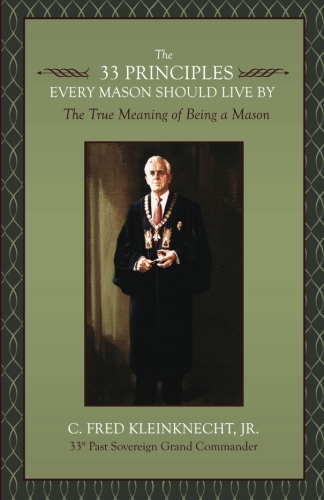 In 1947 Fred took a job at the House of the Temple, literally learning the Scottish Rite from the ground floor to eventually becoming Grand Commander. He was Grand Commander from October 23, 1985 to October 7, 2003. Fred wanted the organization to be “first class” in all of its endeavors. He would often say “because Freemasonry lives not just for today, but for generations to come, we must be first class in whatever we do.”
<p>
Fred rebuilt the Rite’s endowment infrastructure and helped generate forty-seven state and local Scottish Rite Foundations. Internationally Fred restored a regular Scottish Rite presence in Portugal, and established new Supreme Councils in Togo and the Ivory Coast. He reestablished the Scottish Rite in Bulgaria, Croatia, the Czech Republic, Hungary, Poland, Russia, Slovenia, and Romania.
<p>
Fred was a true people person making lasting friendships wherever he went and helping others along the way. Fred had a paperweight on his desk with his favorite quote:<br>
“You can accomplish much, if you don’t care who gets the credit.”
<p>
These 33 principles are what all Freemasons should live by, they are the true meaning of Freemasonry. This book will not only benefit the Freemason but everyone can profit. I pass this along to you as a record of the Kleinknecht legacy of leadership. Also included is an appendix containing powerful messages published in the New Age / Scottish Rite Journal written by Grand Commander Kleinknecht, 33°.