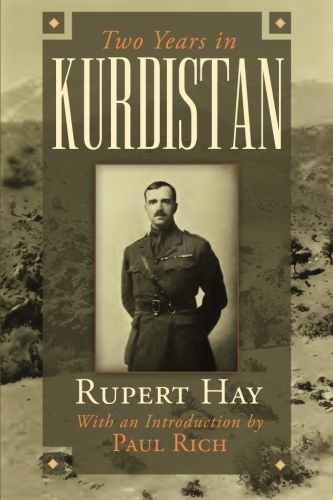 Kurdistan does not exist as a country, yet it certainly does exist as a nation. A people of great number and antiquity, united by a shared heritage, the Kurds are primarily scattered over five countries—Turley, Iran, Iraq, Syria and Russia. For a great many years they have played the unenviable role of pawns in the Middle East’s turbulent power struggles, manipulated by governments using Kurdish troubles as a means of outmaneuvering their opponents.

William Rupert Hay was a British political officer who was in charge of the largely Kurdish district of Arbil in northern Iraq from 1918 to 1920. He was given the task of establishing and maintaining British rule in the area in the wake of the invasion of the First World War.

Two Years in Kurdistan is a detailed personal account of Hay’s time in Arbil. It traces his progress from the initial warm welcome given by the Kurds (who were, in the wake of a war, living in terrible conditions and believed that British rule heralded the dawning of a new and better age) through disillusionment at stiffer taxes, tighter laws, and the failure of the British to significantly improve the quality of life to the eventual rebellion of 1920. Through all these events, Hay paints a vivid portrait of the people and places of northern Iraq and many extraordinary experiences, whether it be hunting the outlaw Nuri Bahil (“a patriot and a hero…a sort of Robin Hood”), conversing with the gregarious tribal chief Hama Agha (who claimed to be 130 and fathered a child when 90) or describing attempts on his own life.

The most important aspect of the book is that it explains the feelings held towards the region by a man who, many years later, was, as British Political Resident, to play a crucial role in shaping the modern Gulf. As Hay noted in 1921, with remarkable relevance to today, “Poor people, I am afraid they must have been bitterly disappointed of the high hopes for the future which they entertained.”