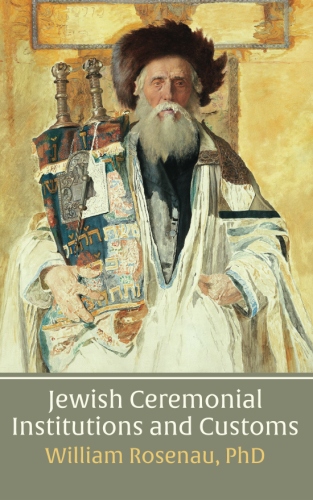 William Rosenau (1865-1943) was born in Wolstein, Germany, and then emigrated to the United States with his family when he was 11. Like his father, he went on to enter the rabbinate, studying at the University of Cincinnati and later the Hebrew Union College, a center for Reformed Judaism. He first served as a rabbi at Temple Israel in Omaha, but after three years, he moved to Baltimore to serve as

a rabbi at Congregation Oheb Shalom, where he ministered for over fifty years with distinction. He was known for introducing English into the services, as well as being an ardent anti-Zionist. Rosenau was involved heavily in the development of social services in Maryland as well as in Reformed Judaism. He served on the Maryland Society for the Study and Prevention of Tuberculosis, the Baltimore School Board, Board of Prisoners Aid Association, Board of Jewish Education, and the Maryland Commission for the Higher Education of Negroes, among other organizations. He also founded the Jewish Welfare Board. He wrote a great deal as well. In addition to Jewish Ceremonial Institutions and Customs, he also produced Jewish Biblical Commentators (1904); Jewish Education (1912); Book of Consolation (1914); and The Rabbi in Action (1937). His papers are held at the American Jewish Archives in Cincinnati.