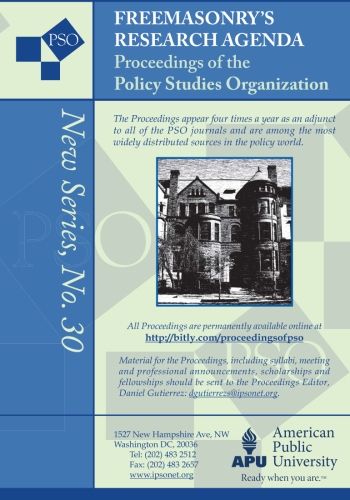 Purchase in Print  |  Purchase on CreateSpace

Perhaps it should not be surprising that a secret society remains something of a secret. A telling comment made on several occasions by Pierre Mollier, the librarian of the Grand Orient or premier national body of French Freemasonry, nicely summarizes the state of research into secret societies everywhere, and particularly those movements related to Freemasonry – the nee

d to take Masonic history out of the ghetto. Pierre remarks in this regard that it is “quite peculiar” that the two most important historians of French Masonry in the late twentieth century were not Masons, Pierre Chevallier and Alain Le Bihan. Coincidentally, perhaps the two most important historians working in English in the late twentieth century were (and are) Margaret Jacob and David Stevenson, neither of them being Masons. Quite possibly Masonic authors, a phrase Mollier uses in preference to the more complimentary Masonic historian, with a few exceptions, have been in that ghetto and not able to make the contributions that those who are more removed and hence more objective could make. So the subject is that academic rarity: understudied and under researched.

The history of secret and ritualistic organizations is complicated not only by arcane and deliberately obtuse language but also by the fact that despite the authorities such as Professor Jacob, the subject has never received the attention from mainstream scholars that it merits. This is among other reasons quite possibly because of the major bibliographical problems such as limited private publication that are presented even at a national level, let alone the failure to preserve local materials. Individual lodge histories generally appear in editions of a couple hundred copies and are only for the membership. They are not present in the British Library or the Library of Congress. Nor are they of academic quality. The subject really deserves but seldom gets a global perspective. Remarks Michel Brodsky, “The level of research within the Craft is low, and mostly concerns the local history of lodges or remembrance of folk heroes.”i Still, the general calibre of research by non Masons is often little better than that done by Masons.