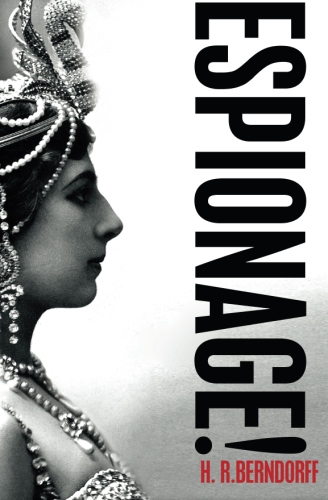 Hans Rudolf Berndorff (1895-1963) was born in Düsseldorf, Germany. From a young age was a journalist with an interest in the bizarre and adventurous, including shipwrecks and piracy. During the Nazi era he published a number of popular novels that steered away from controversy and avoided political repercussions. He used both his own his own name as well as writing as Rudolf van Wehrt and Hans Rudolf. Joseph Goebbels liked his adventurous tales and thought they contributed to public entertainment and thus helped the war effort.
This did no

t damage his career after the war; he continued his writing without any break and was used by the British in rebuilding the German press services. He had also written movie scripts during the Nazi era but because of its wartime origins, the most famous of them, Shiva and the Gallows Flower, was only released in 1993.
Espionage! was his first book. Hanne Hieber, in the Journal of Intelligence History, describes the work as the most influential fiction text in its subject area, praising its originality: “Besides the usual (male and female) suspects like Alfred Redl, Edith Cavell and Mata Hari, he had two chapters on Mademoiselle Docteur, ‘the greatest German spy.’” She adds, “In 1936, G.W. Pabst made a movie with two different casts in France and Britain. The French version was not shown before the end of the German occupation. The British version was distributed to the United States in the early 1940s.” The full story of Berndorff’s ability to remain untouched by a war that destroyed so many writers has never been fully told.