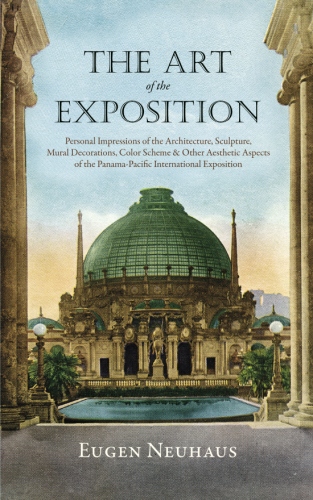 Eugen Neuhaus was born on August 18, 1879, in Germany. He moved to the United States in 1904, ultimately becoming a US citizen in 1911. He began teaching various art and design classes at colleges in northern California, including the University of California. He lectured at numerous colleges, including internationally over the years, before ultimately retiring from the University of California in 1949, at the age of 70. He died at the age of 84 in 1963, in Berkeley.

One of the highlights of Neuhaus’ career was his assistance in developing the Panama-Pacific International Exposition, held in San Francisco during 1915. This work, The Art of the Exposition, is derived from lectures he gave to the public about its design and development, which were very well received. The Panama-Pacific International Exposition, San Francisco, 1915 was an event celebrating the development of the Panama Canal. Many beautiful pieces of architecture were developed for the Exposition, perhaps the most notable being the Palace of Fine Arts. A number of members of the National Sculpture Society exhibited, and this new edition is dedicated to their memory.