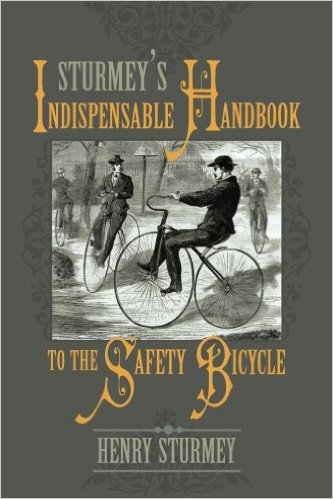 Penny-farthings were part of the cycling craze from the Victorian era, also known as the high wheel bicycle. They were notoriously unstable due to their design, which featured a giant front wheel followed by a very small back wheel, leaving the rider perilously far above ground. By the late 1880s, the “safety bicycle” emerged which featured two same size wheels, very similar in design to bikes today. The term “safety” has since been dropped since the design style is ubiquitous to bikes today. The chain drive and lower center of gravity allowed for a greater usage of bikes. As these bikes exploded in popularity by the 1890s, so did the publishing of various biking guides, notably Sturmey’s Indispensable Handbook for the Safety Bicycle. This manual illustrated how to care for and repair bicycles. For modern readers, it also serves as a helpful illustration of the history of bicycles.