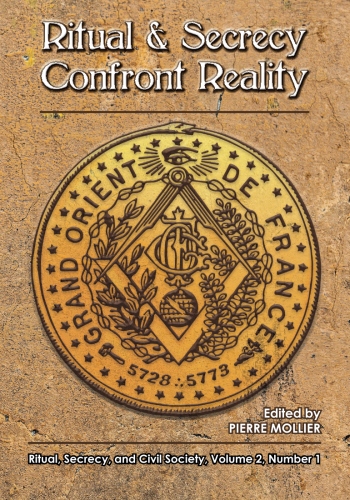 This special issue of Ritual, Secrecy and Civil Society, among other things, questions explores the ways in which the secret initiatory societies interface with political and social history. It would be a great mistake to think that organizations such as Freemasonry are confined to metaphorics and mythologies. Through the years, as the articles in these pages make clear, rule by ritual is more the norm than the exception. Rather than by gunpowder, many moments in history have been determined by the cadences of rite and ritual. Flags carry armies into battle.

As Pierre Mollier well remarks in his introduction to this volume, Anglo-Saxon Free

masonry has often proposed that it “does not do politics.” That will surprise historians of Mexico who have to explain that the country’s first civil war was between York and Scottish Rite Masons, or students of American political parties who note that the first organized political party was the Anti-Masonic. A comprehensive article on the Mormon religious movement, the Church of Jesus Christ of Later Day Saints, provides another example in these pages of the relevance of Masonry to broader issues. In sum then, an effort to wall off ritualistic fraternalism from broader social and geopolitical issues is doomed. Like other recent viewpoints such as gender studies and racial studies, ritual studies are an important help to our understanding of the world, not a footnote.

Not do politics! At times Freemasonry has been just about as political as it is possible to be. That may make some of its proponents squirm, but the research presented here shows just how involved with the hurly-burly of our everydays this fascinating subject can be.

Pierre Mollier is a graduate of the Institut d’Etudes Politiques de Paris (“Sciences-Po”) and the Ecole Pratique des Hautes Etudes of the Sorbonne. He is editor of Renaissance Traditionelle and contributes to Politica Hermetica and Farliro. He is an authority on the French painter Jean-Fraçois Garneray. Pierre Mollier is the Director of Library, Archives, and Museum of the grand Orient of France, with a special scholarly interest in the First Empire and the Third Republic.