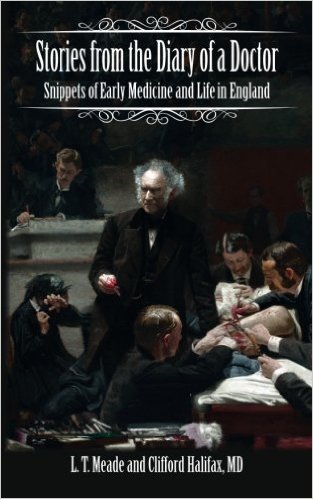 Clifford Halifax was actually the pseudonym of Edgar Beaumont (1860-1921). Interestingly, he used this name only when writing with L. T. Meade. Beaumont was indeed a physician operating in the UK and wrote a variety of works related to being a physician, including This Troublesome World (1893), The Sanctuary Club (1899) and A Race With the Sun (1901). He also published a variety of short stories, with his work bordering on somewhere between semi-autobiographical, horror, detective and science fiction. L. T. Meade was also a pseudonym for Elizabeth Thomasina Meade Smith (1844-1914), whose work also stretched into various territories, including detective, fantasy, romance and science fiction. Including those works with Beaumont, Meade was also responsible for works such as A Master of Mysteries (1898), The Desire of Man: An Impossibility (1899), and The Sorceress of the Strand (1903). Describing her as a prolific author would be an understatement; she is credited with writing over 300 books in her life. She was active in other areas as well, including being a member of the Pioneer club, formed in 1892 by Emily Massingberd and predominately aimed to promote feminism and higher thought. This edition is dedicated to Dr. Bonnie Stabile, versatile leader in public health publishing.